Posted on November 13, 2011 by aseasyasriding

Some thoughts on Saturday’s Dangerous Junctions Tour – or, as it has come to be known, the ‘Tour du Danger.’ The original purpose of the ride, as stated by one of its organisers, Danny of Cyclists In the City –

I have decided a ride around London’s top 10 killer junctions is in order. I am asking as many people as possible to join me. It is an informal ride, to take in these horrific junctions we all have to cycle through every day and to stop and take photographs and film just how awful they are. I don’t really fancy taking on the might of Transport for London’s killer road designs all on my own. So I am asking for people to join me. I hope perhaps 40-50 people will turn up.

was rather subverted by the huge numbers of people who took part, but in the best possible way. The actual ride itself was – barring a handful of ignorant or impatient drivers – very relaxed indeed, and not the least bit dangerous (although I did observe one bike-on-bike crash from which both parties seemed to escape unhurt), thanks to the size of the ride, and the excellent marshalling. A big ‘thank you’ is due to everyone who turned up, and especially these marshals (who had a very stressful job) and the organisers, the aforementioned Danny, and Mark of ibikelondon. No doubt another ride is in order – perhaps just a handful of brave souls – to really document how dangerous and unpleasant these junctions are for cyclists, and indeed pedestrians.

All in all though, the ride was a great success, and certainly seems to have hit the news agenda, coinciding as it did with the tragic and unnecessary second death at Bow roundabout. A board member of Transport for London, Steve Norris – a Conservative politician who thankfully has that rare quality of not being afraid to speak his mind – has now apparently broken ranks with the official line from Boris and TfL, and is openly stating that these junctions are not safe enough for cyclists. This is very different from Boris’s opinion – expressed the very same week – that these junctions are fine, ‘as long as you keep your wits about you’. If Transport for London’s bullheaded strategy of ‘smoothing traffic flow’ through junctions at the expense of the safety and convenience of existing (and, crucially, potential) pedestrians and cyclists can be represented by one gigantic oil tanker at full speed, I can only hope that this represents the first small step in an attempt to slow it.

Here are some photographs from Saturday’s ride. 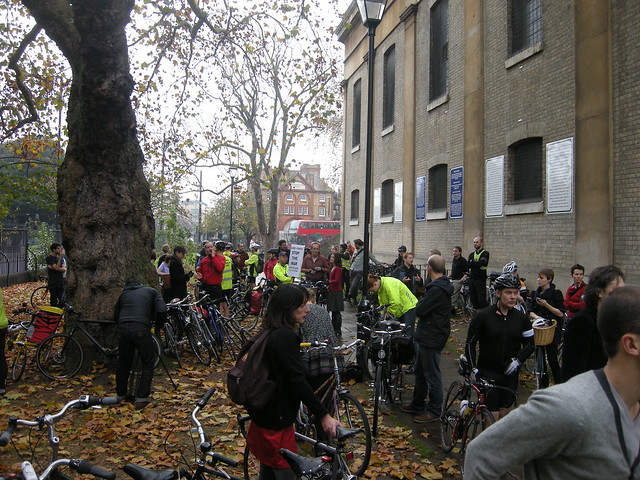 Getting ready for the off. 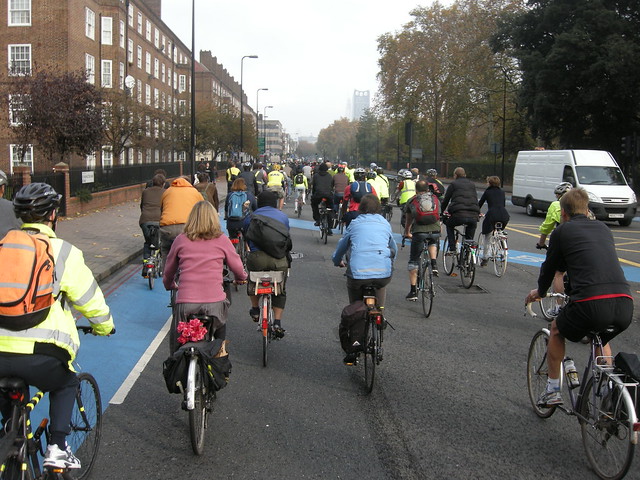 A huge number of cyclists on Kennington Park Road as we head towards Elephant & Castle, as it dawns on me just how many people are on this ride. 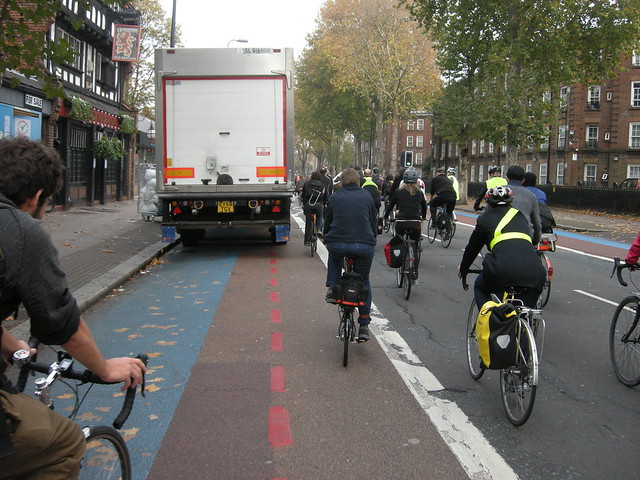 Legally parked lorry, in the ‘superhighway’. 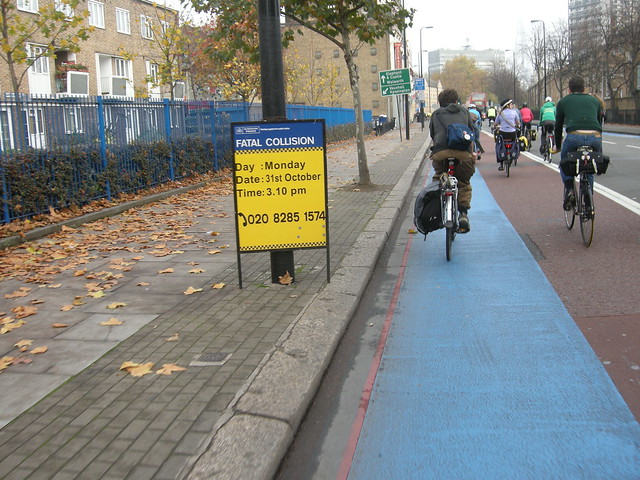 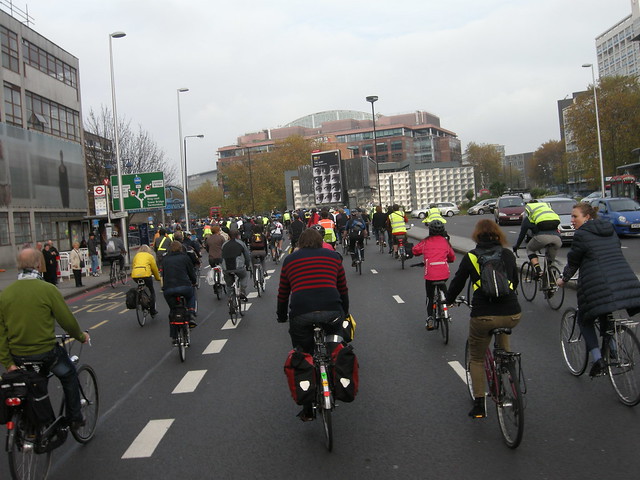 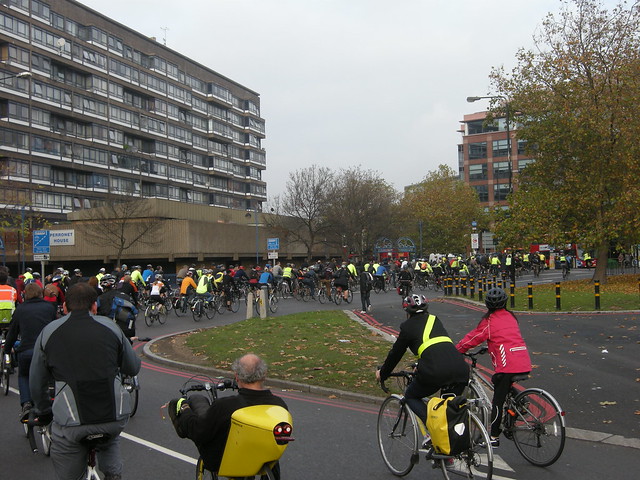 Onto the Elephant & Castle gyratory. 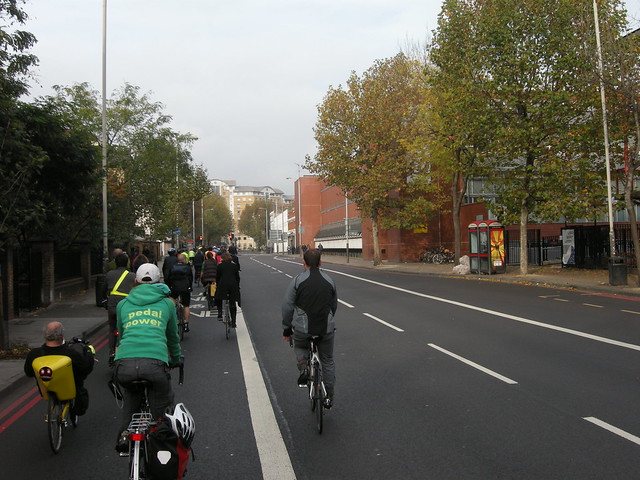 Coming off the roundabout, onto London Road. In the very distance, just in front of the cream building, I can see cyclists at the front of the ride making a right turn onto Blackfriars Road. 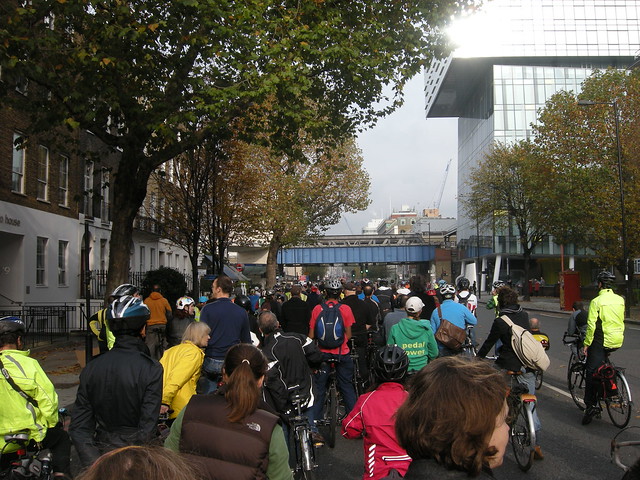 Stopping to boo TfL, outside their headquarters, Blackfriars Road. 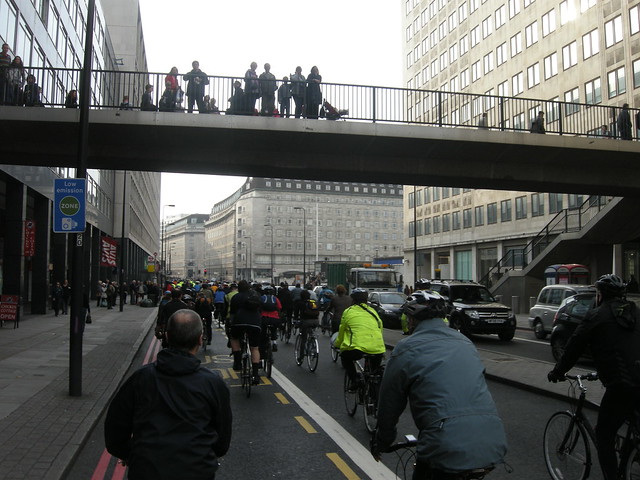 Good natured curiosity from passers by as we head from Waterloo towards Lambeth. 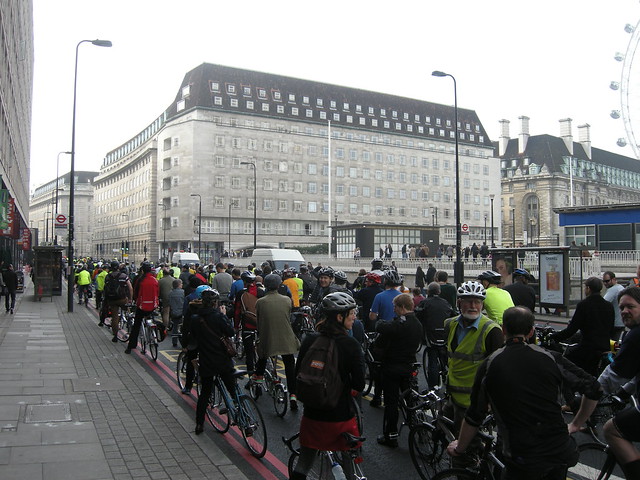 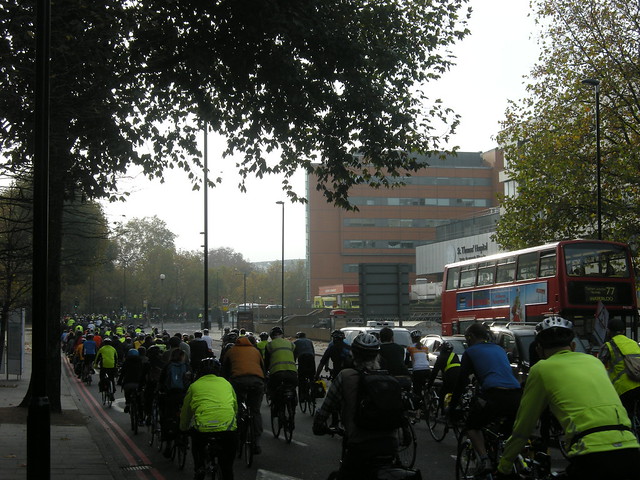 Cyclists as far as the eye can see, Lambeth Palace Road. 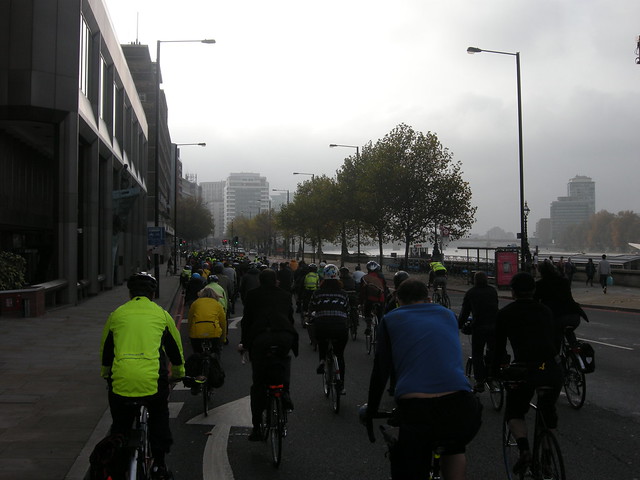 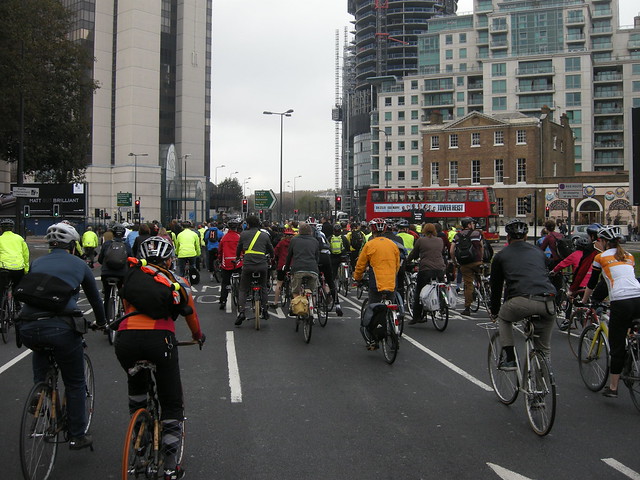 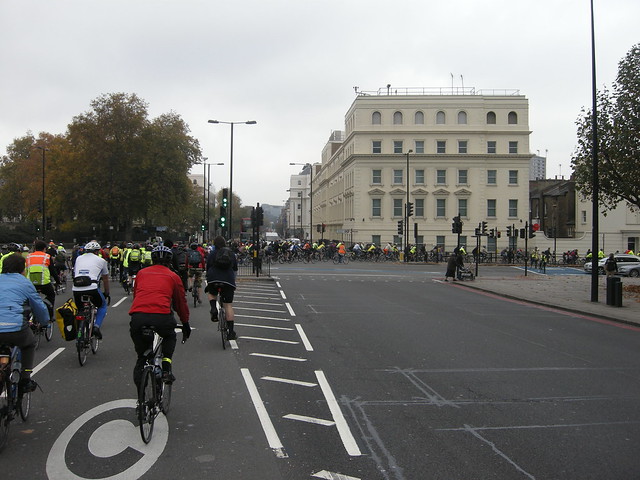 From Vauxhall Bridge, onto Millbank. Behind us, a driver impotently held his horn down for about 30 seconds, in apparent rage at being held up for no more than a minute on a Saturday morning. One of the few poorly behaved motorists on the day. 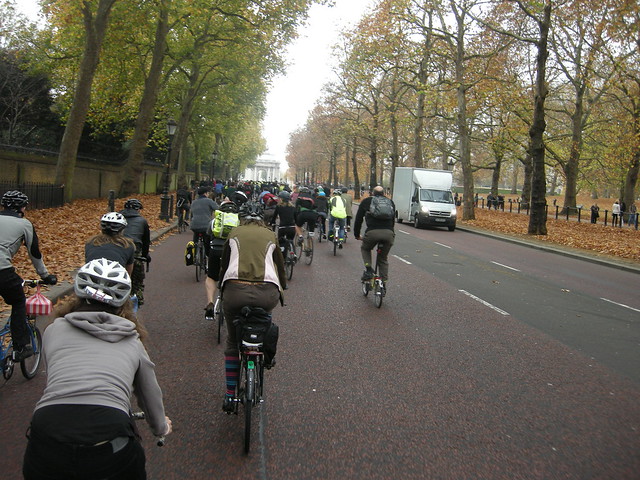 Up Constitution Hill. Here another angry man in a taxi decided to try to overtake us all, while ranting about road tax and insurance. I ignored him. 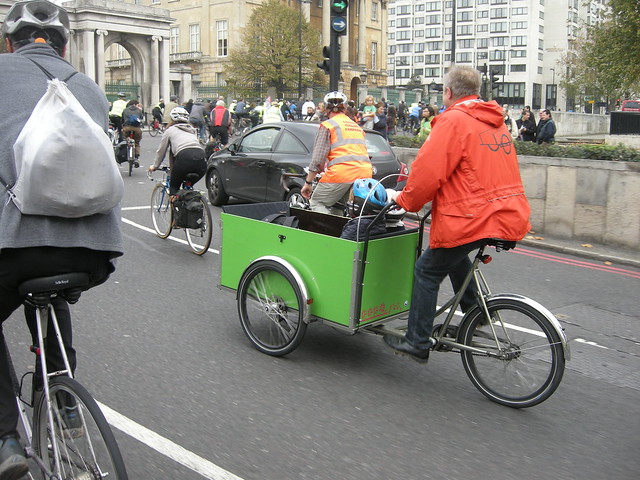 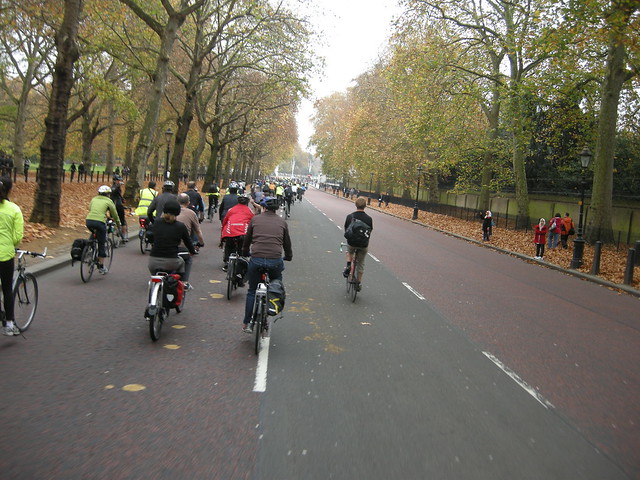 Back down the hill after stopping briefly in Hyde Park. (A cacophony of horns – the last I was aware of – greeted our reemergence onto the roundabout.) 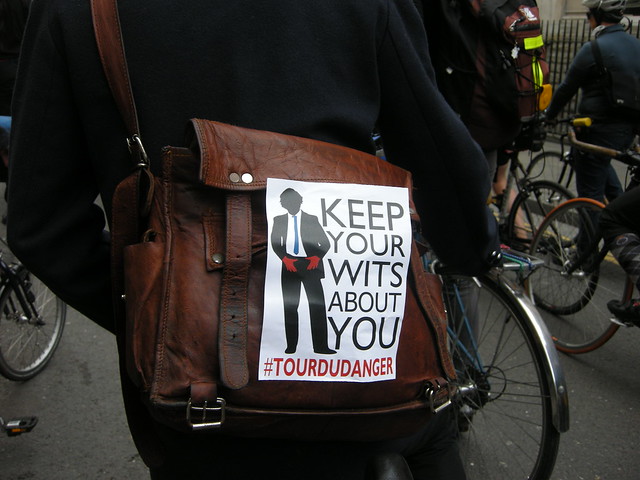 Keep your wits about you. Thanks, Boris. 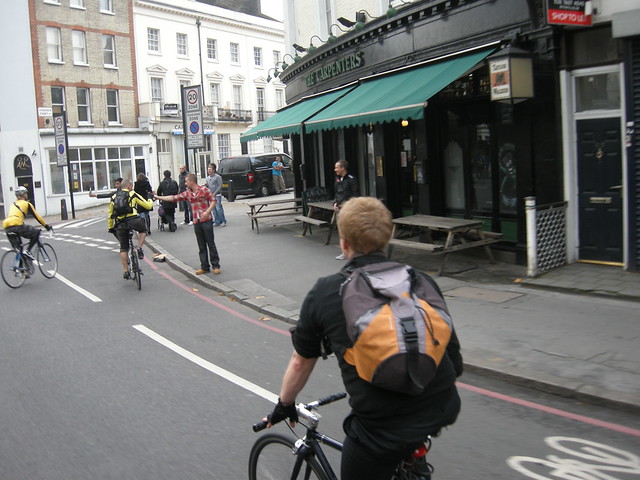 Some chaps sitting outside this pub decided to offer us their beer. 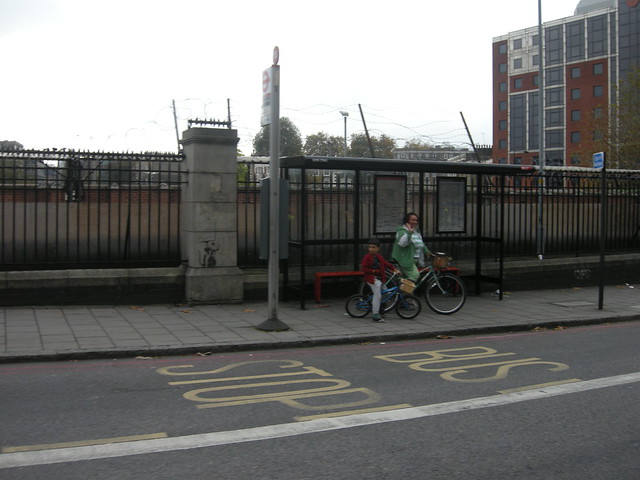 A friendly wave from this mother and her child, cycling on the pavement on Farringdon Road. 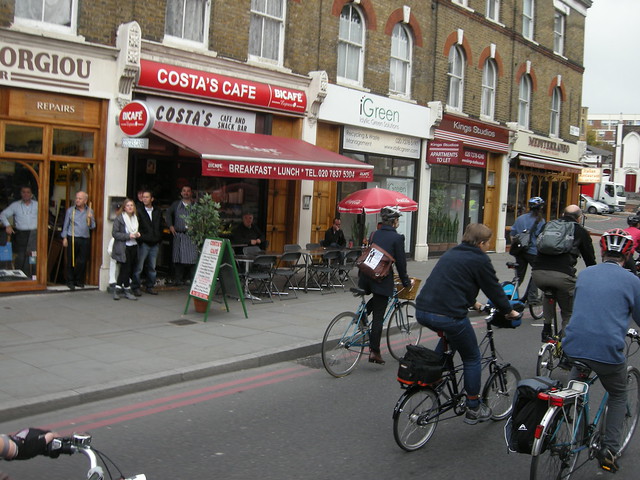 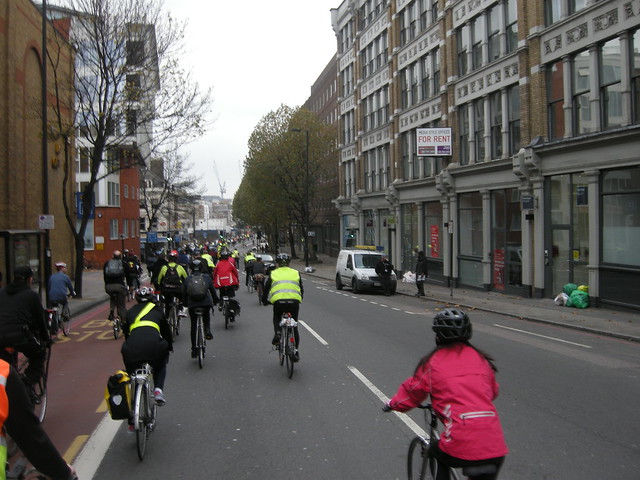 Downhill to the final junction on our tour, the intersection of Farringdon and Clerkenwell Roads.

Finally, a small reminder of why these junctions are so bad not just for cyclists, but also for pedestrians. I stopped at the north-western corner of Parliament Square to film the procession of cyclists through the gryatory, and accidentally left the camera on the front of my bike running. You can see the result in the video below.

Notice how pedestrians have to wait to cross here. This isn’t actually because of the ride itself (although in other locations we did, unfortunately, have to stop pedestrians from crossing the road when they would otherwise have been able to do so). It’s because there is no pedestrian crossing phase throughout the entirety of the clip. 300+ cyclists are able to move through this crossing without pedestrians getting a green man signal. A sure sign of how the signal timings are utterly biased against pedestrians at this busy location.

(See also reports from Cyclists In The City, At War With The Motorist, and ibikelondon.)

1 Response to The Tour Du Danger