Posted on January 12, 2012 by aseasyasriding

At Mayor’s Question Time on the 10th of November last year, Boris Johnson was quizzed at some length on cycle safety. Shortly after making his now rather infamous remarks about Elephant & Castle being ‘fine’ to negotiate on a bike, ‘if you keep your wits about you’, he made the following comments about cycling facilities –

There will be different strokes for different folks. Some cyclists will want to use… I mean, for instance, last night I was going along the Euston Road, and you get to that bit where you come to the underpass, and then the cycle route takes you on a sort of fiddly thing, where you go over… there’s a path, and you’ve got lots of oncoming pedestrians, and then you’re invited to cross at a traffic light, and so on and so forth. Or you can just scoot down the underpass. I just go down the underpass. And there are many, many other London cyclists who will do the same. And I go round, y’know, Hyde Park Corner – there’s no problem. For me. Because I’ve become used to it.

(Jack Thurston of The Bike Show has captured the audio – this passage is at 32:30)

The general thrust of Boris’s comments – at least as I interpreted them – are that what few cycling facilities are present in London exist only to allow people to ‘build up their confidence’ before they venture off into the underpasses, around the gyratories, and along the dual carriageways that Boris himself evidently finds so suitable for cycling. Once people have their ‘confidence’, then they can assert themselves on the road, and the facilities are no longer necessary.

The video below shows a stretch of road that Boris evidently feels that any cyclist with sufficient confidence should be using. It’s the Euston underpass on Euston Road, that he refers to in the comments I have quoted.

The video largely speaks for itself, but I can make a couple of observations.

Firstly, the underpass itself – while unpleasant – is not the most hazardous part of this short stretch of road. The main safety issue is the crossing of slip roads, both before and after the underpass, where you have to merge with vehicles that are travelling at or around 30 mph – much faster than most cyclists (and even ‘confident’ cyclists) can manage. These are roads that are simply not designed for bicycle use; I find it quite incredible that Boris feels comfortable in exhorting people to use ‘confidence’ as a compensatory measure.

Before the underpass, you have to hold the middle lane to avoid being ‘left-hooked’ by vehicles turning into Gower Street; as this lane splits in two, you have vehicles overtaking you in your lane, like the van in my clip. After the underpass, you emerge with vehicles passing you on both sides, and have to negotiate your way back to the nearside. These are serious challenges that are quite obviously going to put off most people, even those who currently cycle in London.

The second point is that while I didn’t necessarily fear for my life, this is not a strip of road that is at all pleasant to cycle on. It’s stressful; just like cycling around Hyde Park Corner, or Elephant & Castle. This is a fact Boris doesn’t seem to consider when he encourages people – ‘confident’ people – to use the road network. Staying alive is one thing – actually enjoying your journey is surely something else. Using a bicycle to get from A to B in a city shouldn’t feel like a white knuckle experience; people will want more from a bicycle journey than mere objective safety. They will want it to feel safe, not just be statistically safe, something Boris – perhaps for expediency – fails to grasp.

The third point is that ‘confidence’ is not going to be enough for everyone – it’s only going to be enough for young to middle-aged males who are more comfortable asserting themselves and are athletic enough to move at closer to motor vehicle speeds. Children are not going to have the confidence to use the Euston underpass (in any case, I can’t imagine any parent letting their child use it), and nor are the elderly.

There is, however, the alternative that Boris talked about.

Again, the video largely speaks for itself. The route – while useful in that it allows you to cycle westbound without using the intimidating underpass – is, speaking frankly, a pile of crap. It is, as Boris says, ‘fiddly’. There are, as he says, lots of oncoming pedestrians, and you do have to wait at the lights, for some time.

Cycle tracks should not re-emerge back onto a slip road right by a parking bay. 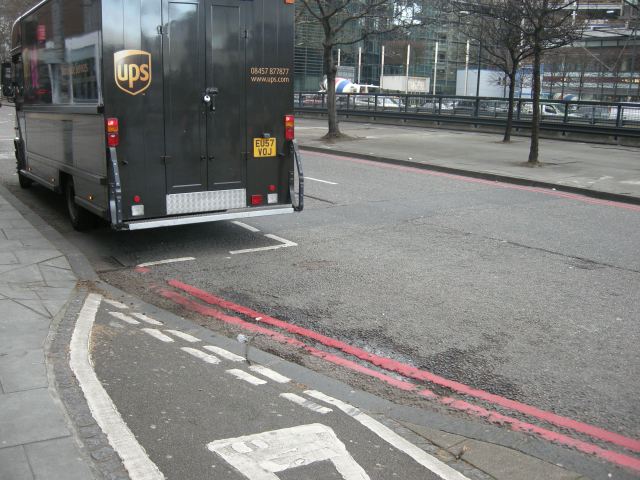 Two-way cycle tracks should not be this narrow, nor should pavements disappear alongside them –

Especially when there is a vast amount of underused carriageway space that could be reallocated. 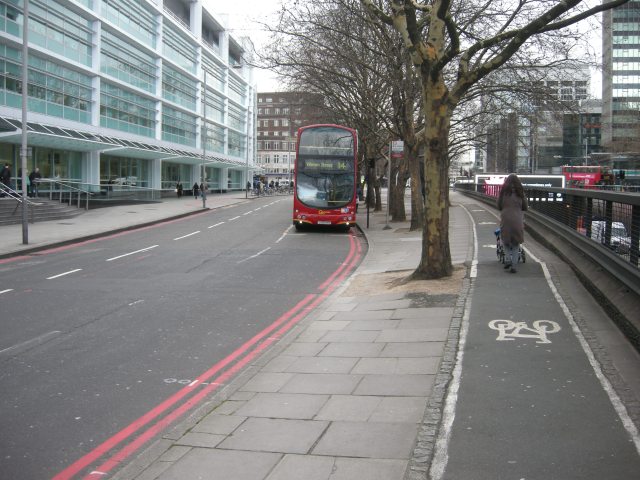 It’s all very well for Boris to talk down these kinds of routes as alternatives to the underpasses and gyatories he is comfortable with using – but they are part of his remit! They should not be this bad, and it is his responsibility to sort them out, so that they are a decent way, indeed the quickest, safest and best way, for cyclists to negotiate intimidating road layouts. (Setting aside the fact that plenty of gyratories – for example King’s Cross – have no alternative at all). Cycle paths like this one are typical of those implemented, and unmodified, by transport authorities that don’t care about cycling (and indeed walking), and are uninterested in doing things properly.

Boris could change this, quite easily. He chooses not to. He’s happy cycling through underpasses and around gyratories, and that means we all have to be.

19 Responses to ‘Scooting down’ Euston underpass