Posted on March 3, 2014 by aseasyasriding

Many town and city centres in Britain have extensive pedestrianised areas. Often these areas will be surrounded by busy distributor roads, designed to accommodate the motor traffic that has been excluded from the pedestrianised streets (and which in practice have served to induce demand for driving within urban areas).

Given the hostility of these roads for those on bikes, it is not surprising that pedestrianised areas are attractive routes for cycling, even when (as is often the case) cycling is illegal within them. Pedestrianised streets are also important routes and destinations in their own right. So should cycling be allowed in pedestrianised areas?

Here’s what the Dutch CROW manual has to say –

Pedestrian precincts can be found in many city centres. Although this measure was prompted by the annoying presence of motorised traffic, many of these precincts are now only open to pedestrians, in order to create a pleasant and safe shopping atmosphere. However, the question  is whether it is always necessary to prohibit bicycles as well as motorised traffic. After all, compared to the latter, cyclists cause hardly any nuisance. Another issue is that central areas and pedestrian precincts that are closed to cyclists often form a major barrier. Furthermore, these areas also accommodate a great many destination points for cyclists. Bicycle-friendly policy ensures that these destinations remain accessible to cyclists.

The manual then suggests that bicycle and pedestrian traffic can be combined if the number of pedestrians, per metre of route width, is below 200 per hour. (To take an example, for a ten-metre-wide shopping street, this would amount to 2000 pedestrians per hour walking past an imaginary fixed line on the street.) Above this level, the CROW manual does not recommend allowing cycling on these streets.

We have practical examples of this in the UK. East Street, in Horsham, is now closed to motor vehicles between 10:30am and 4:30pm each day, but with cycling still permitted. For these six hours, it’s a pedestrianised area, with cycling in it. After two years, there hasn’t been a single incident involving cycling, or complaint (as far as I am aware). There have been only two (slight) pedestrian injuries, both involving motor vehicles, outside of the ‘pedestrianised’ hours. It works well.

However the background assumption in the UK seems to be that cycling is ‘a problem’, that needs to be clamped down on, and eradicated in pedestrian areas, even where there is scope for its introduction. Cycling is banned on Guildford High Street during the day, for instance, despite this being a very wide street (and despite it forming part of the National Cycle Network). 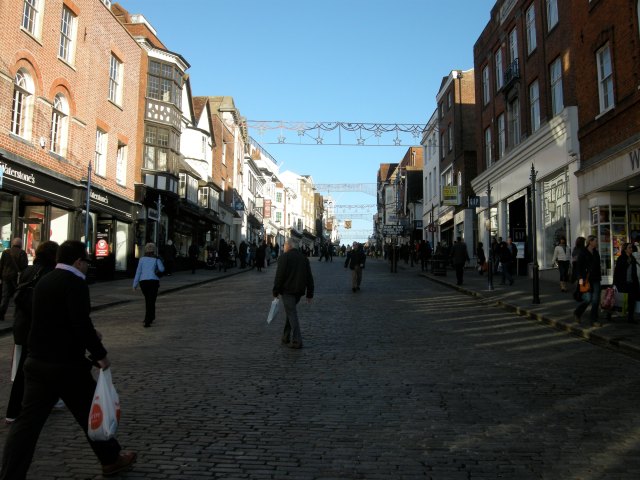 Cycling is also banned, entirely, in the centre of Stevenage. 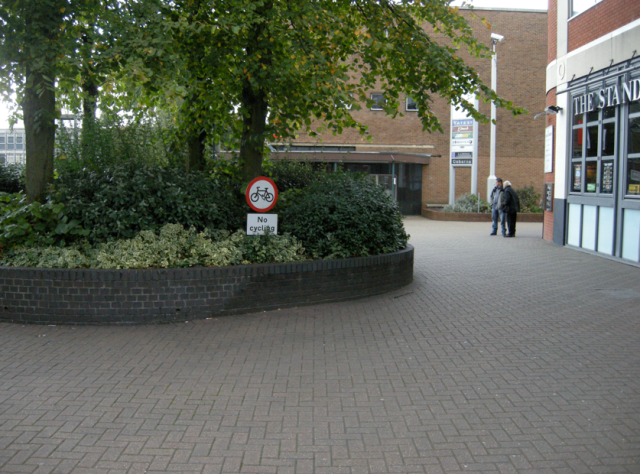 No cycling here either

And there are doubtless many other examples. Councillors in Peterborough are agitating for a complete ban on cycling in the town centre.

The rationale for these bans – or the refusal to lift them – is usually a single incident (or even just an anecdote) about a near miss, or a collision, involving a pedestrian and a someone cycling. This is a poor basis for making policy, and, if applied to the road network as a whole, would lead to the wholesale closure of roads to motor vehicles.

Amazingly enough, we actually have some pretty good Department for Transport recommendations on cycling in pedestrian areas, that date back to 1993 – TAL 9/93 [pdf]. This guidance was itself informed by a Transport Research Laboratory study, PR15, Cycling in Pedestrian Areas – conducted at a time when the TRL was an executive arm of the DfT.

That study was based on hour-long footage of 21 pedestrianised sites – 12 in Britain (Beeston, Bristol, Cambridge, Canterbury, Chichester, Leicester, Manchester, Nottingham, Oxford, Peterborough (2) and York) and 9 in Europe (3 each in Denmark, Germany and the Netherlands), followed up by 12 hour video recording sessions at four British sites, and questionnaires.

There are some very interesting findings. 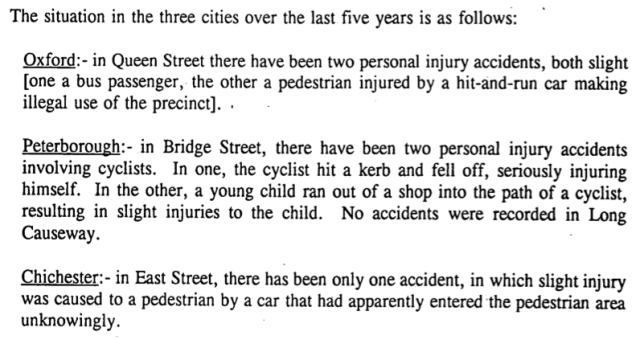 From page 8 of the study

Observation revealed no real factors to justify excluding cyclists from pedestrianised areas, suggesting that cycling could be more widely permitted without detriment to pedestrians.

One of the main reasons for reaching this conclusion is how people cycling in these areas behave. They have an interest in self-preservation; they slow and adapt their behaviour to how people are walking around them. The study makes an analogy with people running in pedestrian areas. They run faster when the street is open and clear, but when it is busier and congested, they slow. (And we wouldn’t dream of banning running in pedestrian areas!)

The study contains some interesting data on how people cycling behave, particularly in those study areas where cycling is not permitted. One example is East Street in Chichester, which had a formal ban at all times in 1993, when the study was conducted. I’ve graphed the data below. 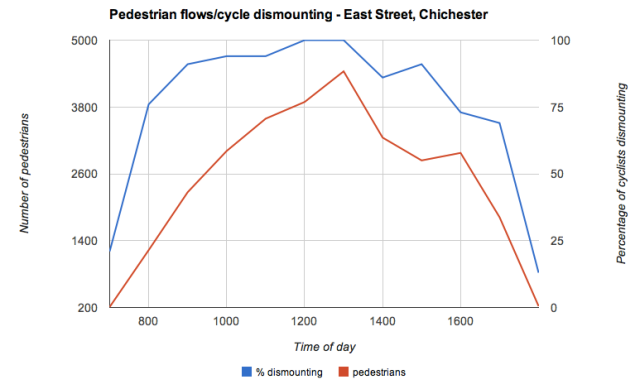 Pedestrian flows, and rate of cycle dismounting, during one day

What is really noteworthy here is how people cycling behave. At the start and end of the day, very few people are dismounting (the blue line) – despite cycling being illegal. As the day progresses, however, the number of people dismounting increases, with almost everyone choosing to dismount in the middle of the day.

There is a clear match here between dismounting rates (in blue) and the number of pedestrians on the street, per hour (the red line). When the street is busiest with people (with several thousand people walking along it, per hour) almost everyone is dismounting. Conversely when the street is much more empty (with around a thousand people walking along it per hour, or less) the dismount rates are much lower.

These patterns are repeated throughout the other British and European study sites in the TRL report, whether cycling is legal or not, suggesting that the governing factor on whether people choose to dismount or not was not legality, but the density of pedestrians on the street. Indeed, it’s these densities that inform the CROW guidance on whether cycling should be allowed, or not. 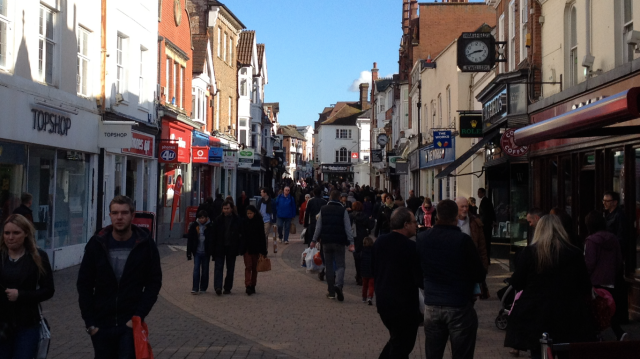 Lunchtime. Even if cycling were legal here, would you bother under these conditions? 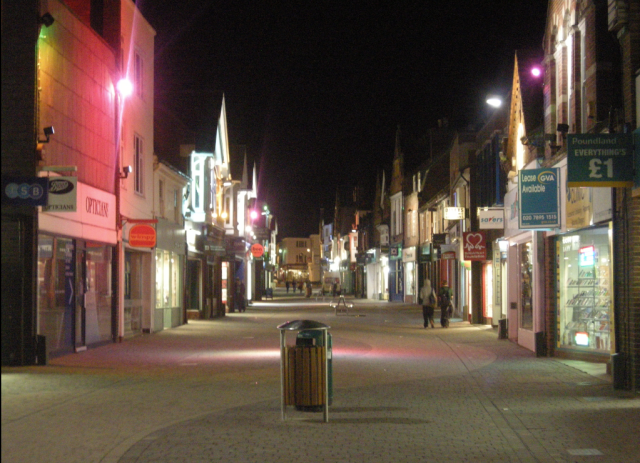 The same street, at 7pm. Still illegal to cycle here – but any reason why it shouldn’t be allowed?

The standout message, therefore, is that cycling behaviour naturally adapts itself to pedestrian environments. Rather than clampdowns and enforcement, perhaps we should be moving to trials of cycling in pedestrian areas, and examining how people behave and respond. The evidence shows that we can trust people to make the right decisions.

This entry was posted in Pedestrianisation. Bookmark the permalink.

53 Responses to Cycling in pedestrianised areas