The E-W and N-S Superhighways – major change, that needs to be supported

Posted on September 5, 2014 by aseasyasriding

So the big story this week is obviously the launch of the consultations on two new ‘Superhighway’ routes in London. One running from Elephant & Castle towards Kings Cross; the other from the Westway to Tower Hill.

Undeniably, there are problems with these plans.

The whole scheme is composed almost entirely of two-way tracks on one side of the road, which aren’t really appropriate, except in some locations – for instance, along the Embankment, and Constitution Hill. Two-way tracks present more danger with turning conflicts, and they are more inconvenient, as often the road will have to be crossed to make a simple left turn onto the tracks.

What Transport for London call ‘early start’ signals (but in reality are ‘always stop’ signals), as employed at Bow roundabout, feature in many places on these Superhighways, particularly around Parliament Square. This design still isn’t good enough, mainly because it’s inconvenient, and can be confusing.

Turns on and off the Superhighways appear to be being achieved through a formalisation of the ‘Copenhagen turn’, with turns being made in two steps. Again, this isn’t really good enough. 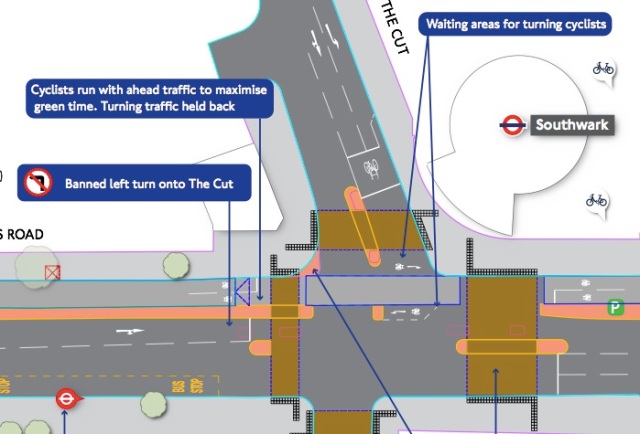 Making turns off the track, outside TfL’s headquarters, via a waiting area

And in many places the designs have been overcomplicated, with an excess of signals and markings that shouldn’t really be necessary. Parliament Square in particular looks very messy.

BUT (and it’s a big but) these plans are undeniably bold, and I think they should be strongly supported.

This is for a number of reasons.

the hard stuff is not digging up and remaking roads, not in a transport rich city like London. And even elsewhere resources appear if something’s a priority. The hard stuff’s the politics – getting support for change.

And this is change – big change. Although these routes are far from perfect, to me they represent a real attempt to actually prioritise cycling as a mode of transport, and on main roads too, something that we haven’t ever really seen anywhere in Britain. There are direct routes across junctions that are currently truly, truly horrible to cycle across, even for someone who is experienced, and familiar with cycling in London. Tower Gateway has a straight, segregated route across it, connecting with Superhighway 3, achieved by completely removing motor traffic from Shorter Street. 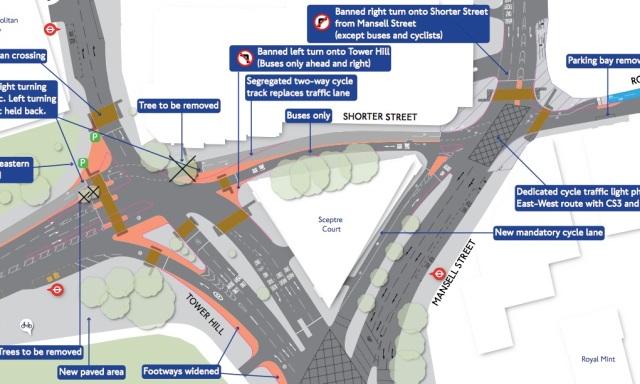 Likewise, the sliproad from Blackfriars Bridge to the Victoria Embankment is being turned into a bicycle-only route, which is fairly extraordinary, given the protests and arguments about this location, which fell on deaf ears for so long. The roads involved are the ones that I have been suggesting could easily accommodate cycling infrastructure, if the political will was there. And now that is happening.

In addition, as far as I can tell, every single bus stop in the these plans is bypassed, with the cycle track passing behind them. That means no interactions with buses, whatsoever – no fudged ‘wide bus lanes’ that are alleged to be suitable for sharing. This is hugely significant.

Indeed, overall, the impression given from the plans is that TfL been thinking hard about who they are designing for.

One of my pet moans, for a long time, has been the ‘dual network’ approach, that involves minimal change on the carriageway for those people already confident to cycle on busy roads, coupled with inadequate and inconvenient pavement cycling for those who aren’t. I think it’s fair to say that these Superhighway designs, whatever their flaws, are very different from that approach. There is clear intent to create something that is suitable for everyone, infrastructure that anyone on a bike would be happy to use, be they someone in lycra on a racing bike, or a very young and wobbly child.

And there are major benefits for pedestrians, too. Motor traffic will be further away from the footways, which means walking will be safer, quieter and more pleasant. The carriageways are being narrowed, too, which means shorter distances at crossings. And I strongly suspect that cycling on the footway will be a thing of the past along these routes – no more people cycling along the pavement on the Embankment, for instance, because they will have a much better alternative.

The problems with these designs can, and should be, ironed out. The ‘always stop’/’early start’ signalised junctions should be upgraded to full separate signalisation of bicycle and motor traffic movements, and I think this could be easily achieved at a later date, even if the designs go ahead as they stand. Likewise, most of these roads are so enormous that the two-way track approach could be adapted, with another track on the other side of the road, and the two-way track reverting to one-way.

And there are minor details that could be got right now. The tracks should be built properly, with shallow, forgiving angled kerbing to maximise effective width. Some of the signalisation simply doesn’t need to be there. 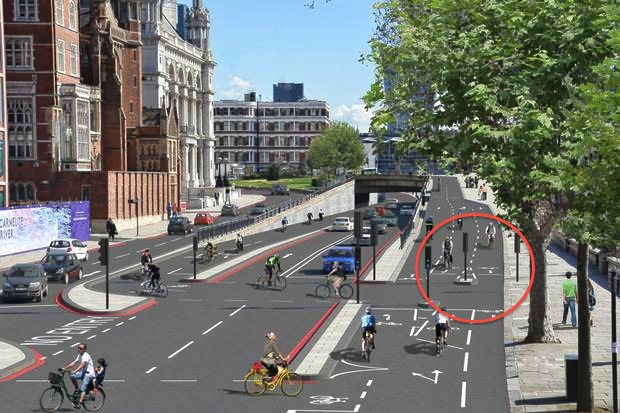 Do we really need stop lines, and the expense of signals here, for simple bicycle-only movements, when give way markings would work perfectly adequately?

These are comments that should be made in responses to the consultation.

But the overall scheme has to be supported. If these Superhighways are built, they will undoubtedly be tremendously popular. The kind of people you see cycling on the Embankment during Skyrides – absent for the rest of the year – will be able to do so, whenever they want. 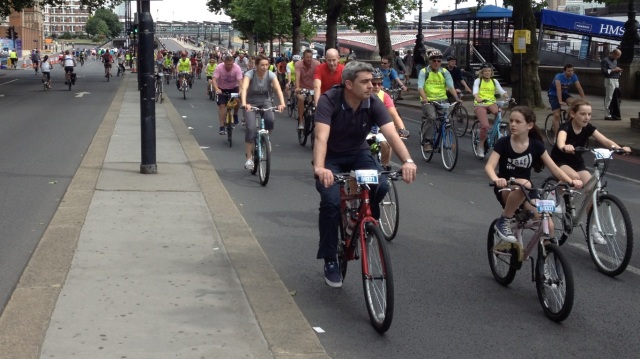 These conditions will be embedded, permanently

These tracks would be just the start, of course. They will only cover a tiny, tiny fraction of the routes that people will actually want to use in central London. But they will drive change elsewhere. Roads that connect up to these Superhighways will be the next obvious targets. Even in this consultation TfL themselves state that their ‘wish is for segregation’ on Westminster Bridge – not part of this scheme, but an obvious connector to it.

And more broadly, the Superhighways will make the case for cycling elsewhere in London, and indeed across the rest of the country. They will show that it can be done, and that when you make conditions right, cycling is an obvious mode of ordinary people, and that it will make a tremendous difference to the quality of our roads and streets. That has to happen.

11 Responses to The E-W and N-S Superhighways – major change, that needs to be supported