Posted on February 2, 2015 by aseasyasriding

The website The American Conservative has published a deeply, deeply confused piece about road design, apparently inspired by the announcement the cycle ‘Superhighways’ in London will be going ahead.

The tone is set in the opening paragraphs.

Jacobs eventually prevailed, protecting her community and signaling a shift against the city central planners who had dug up or flattened large swaths of American cities in the name of progress, urban renewal, and the automobile age. Jacobs’s victory against the urban highway is still spoken of in almost reverential tones by many committed to healthy cities and strong communities.

Until, that is, they were offered a highway for bikes.

the effusive praise heaped on these cycle superhighways is strangely reminiscent of the rhetoric of 50 years ago used to coax cities into building the original highways urbanists so lament today.

The superficial logic here appears to be that – because highways were bad when Robert Moses attempted to drive them through Manhattan, knocking down buildings and any other structures that were in their way, any other kind of ‘highway’ must also be bad.

This is so silly it shouldn’t really merit discussion at all, but for the sake of argument let’s examine why. Moses’ highway plans involved destruction on a vast scale – it did, literally, involve flattening, along with community severance, noise, danger, sprawl, and the myriad other problems detailed in Jane Jacobs’ book.

But the ‘highways’ being planned in London don’t involve any destruction, whatsoever. They are merely a reallocation of existing road space, away from motor traffic, and towards the bicycle and, to a lesser, extent,towards walking).

Stopping this project wouldn’t be any kind victory against ‘the highway’, because ‘the highway’ would still exist. It would be composed of four lanes of motor traffic, instead of the proposed two or three, with more space for cycling and walking.To suggest that this kind of intervention has to be opposed by those ‘committed to healthy cities and strong communities’ on the grounds of consistency is utterly ludicrous.

Lurking behind this incoherent introduction, however, is a marginally more substantive argument – namely, that the way to get everyone to behave better, and to increase safety, is to mix everything up – to push all modes together, into the same space.

This is the broad brush argument against ‘segregation’, which makes little or no distinction between the kind of segregation employed by the motor traffic-fixated highway engineers and city planners, of the mid-20th century, and the kinds of segregation represented by London’s proposed cycle Superhighways – and indeed the Dutch and Danish national approach to urban design. (I’ve commented before on this tendency to lump in progressive attempts to separate motor traffic away from people with the ugly, hard and unpleasant designs that got people out of the way of motor traffic).

It is almost as simplistic as the argument that bicycle ‘highways’ must be bad in urban areas, because motorways in urban areas are bad. It suggests that separating walking, cycling and driving from each other is intrinsically bad, for much the same reason – because this was the philosophy of planners like Moses.

So we find the author of this American Conservative piece, Jonathan Coppage, opining that

Urbanists rightly, and often, decry [the] auto-centric legacy that yielded the streets to one mode of traffic alone. But many are also fond of their bicycle, and can’t help but be tempted by the idea of cruising along smoothly, with no cars, no pedestrians, no dangers to worry about on their commute. That is exactly what is wrong with putting highways in cities in the first place.

City streets should be in a continual conversation with the buildings surrounding them, with the people flowing in and out.

To be consistent, anyone taking this position should oppose footways, as these are, of course, a yielding of the street to ‘one mode of traffic alone’. But this isn’t what is being argued.

Instead a concurrent argument is made about ‘segregation’ being unsafe –

Segregated travel lanes make people feel comfortable by separating them. They make them feel safe. And that can make them especially dangerous… Exposure to all the dynamism around them can in fact keep them aware of their surroundings, and keep all the users of a street honest

Likewise, consistency here would involve arguing that footways make people feel safe, and that people walking should be exposed to the ‘dynamism around them’, to ‘keep them honest.’ But no. Apparently it is only bicycle traffic that doesn’t merit its own dedicated space on busy roads.

No sane author would attempt to suggest mingling pedestrians in with motor traffic on a road like the Embankment is appropriate, either on grounds of aesthetics or safety. Because it is a thunderous road carrying tens of thousands of motor vehicles a day, including coaches and lorries. Yet this is apparently the place for people on bicycles. 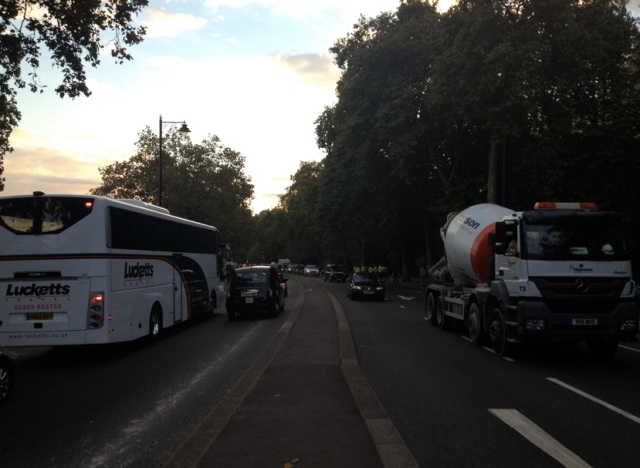 People flowing in and out here?

This is the confused world of the ‘shared space’ advocate, who insists that the ‘correct’ approach is to mix cycle traffic with motor traffic, citing ‘powerful examples’ of shared space that aren’t in the least bit shared –

London already has powerful examples of the power of “shared space” on its busy Kensington High Street, which ripped out many of the protective barriers and warning signs as an aesthetic renovation that was subsequently followed by a drop in accidents. To give bicyclists their own carve-out would be a step backwards in the revitalization of the city, not forwards. 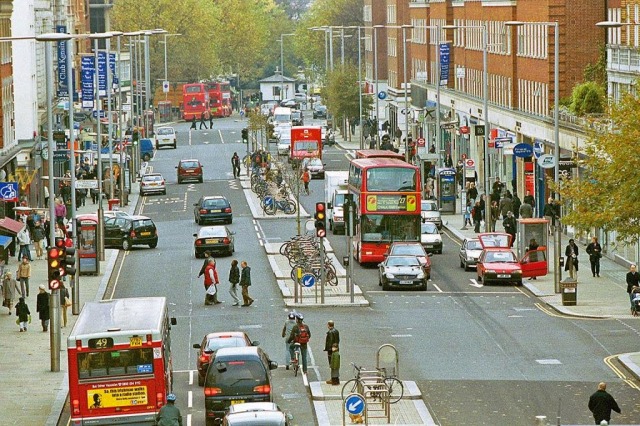 And despite all the bleating about keeping people ‘alert’, and ensuring they don’t drift into complacency on busy streets, there is apparently is no consideration of how attractive it is to cycle on these roads mixed in with motor traffic, not just for the tiny minority people currently willing to do so, but (more importantly) for the vast majority of people who wouldn’t dream of doing so.

Would this family really be better off mixed in with motor traffic?

The ‘vision’ – such as it is – has no conception of broadening out cycling beyond the current 1-2% share of trips in cities like London. Instead it involves using existing cyclists as a form of sacrificial lamb, in a deluded attempt to keep drivers in check by putting hazards in their way.

It’s an approach to road safety and road design completely divorced from reality.

This entry was posted in Shared Space. Bookmark the permalink.

18 Responses to Sharing and caring