The solution is design

Posted on June 2, 2015 by aseasyasriding

The media storm after that incident now appears to be moving into its final stages as the driver involved has apologised.

Without wishing to comment on the individual behaviour on display, it’s fairly obvious that the layout on the road in question is almost a recipe for conflict. A through-route for motor traffic is combined with a busy route for people cycling, into and out of Richmond Park. Add in a truly terrible piece of cycling provision that very few people are going to be prepared to use, and it’s almost inevitable that this kind of confrontation would occur.

Above is the end/start of the ‘cycle provision’ towards the southern end of Priory Road. It may not be entirely obvious but this is a two-way path. There is no similar ‘infrastructure’ to speak of further south along Priory Road.

This footway – I won’t even credit it as a cycle path, because it is just paint on a footway – is plainly totally unsuitable for even minimal volumes of cycle traffic. It’s barely wide enough for two people to stand next to each other on two bikes, let alone to pass each other in opposite directions with a combined passing speed of 20-30mph.

Not just that, but it gives up at side roads, notably at the mini roundabout where the confrontation occurred. 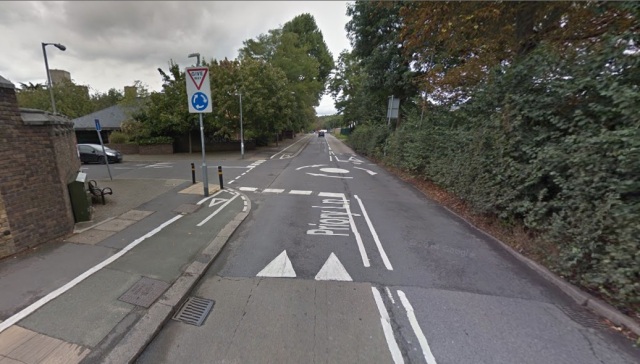 This ‘path’ incorporates the dangerously ambiguous ‘everyone gives way to everyone else’ gibberish that results in deaths, and has been so justifiably criticised recently in a new design in Bradford. 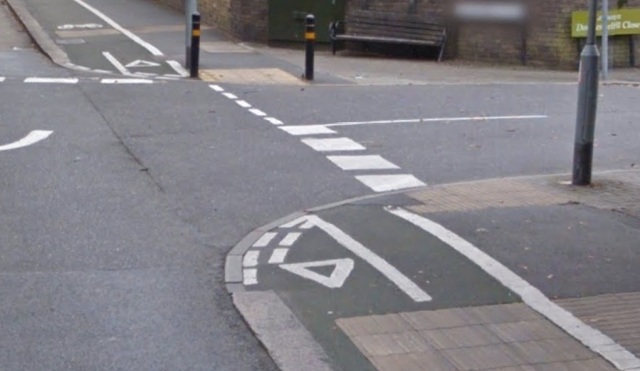 This tokenistic crap really has to go, not just because it inflames drivers, but also (and far more importantly) because it is dangerous, and also allows councils to get away with pretending that they’ve ‘provided’ something for cycling on a particular road or street when in reality it will often make a bad situation worse.

So what’s the answer?

Straightforwardly, something has to give. Either the carriageway itself should be made attractive for cycling, for everyone – and by for everyone, I mean reducing motor traffic levels down to around 2-3000 PCU per day, something like 200 vehicles per hour in peak, or a 3-4 a minute.

Alternatively, some high-quality parallel cycling infrastructure, again suitable for everyone (that means young children as well as people in lycra, riding fast to or from Richmond Park) should be provided alongside the carriageway.

Given the width constraints here, it’s hard to see how this latter option could be achieved.  The best option might be to convert the whole footway into genuine cycle provision, on which people can walk. 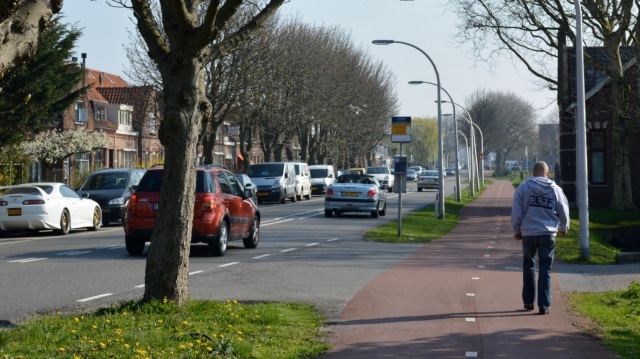 This would be a 3-4m bi-directional path of road standard. The downside of course is that pedestrian comfort would be sacrificed, and it may well be that there are two many pedestrians using this road for this to be a viable option. The width may still not be sufficient, and I suspect this option is unworkable.

Alternatively more space could be gained by converting this road to one-way for motor traffic, allowing a much wider bi-directional path to be constructed, with a separate footway alongside it. Indeed, looking at this view again –

… the entire right-hand lane here (which has few turning conflicts) could become the bi-directional path, separated from the carriageway, with the footway restored to pedestrian use only. This example in Haarlem – perhaps a slightly different urban context – shows what could be achieved. The bi-directional path on the left here was constructed from a vehicle lane. 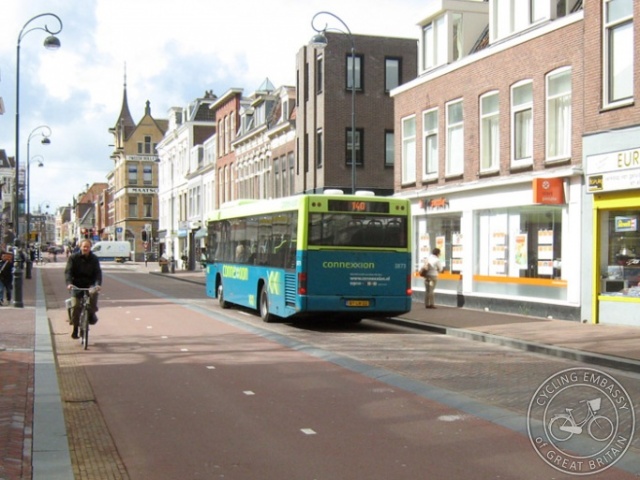 Restricting the road to one-way would obviously entirely cut-out through (motor) traffic in one-direction, lowering traffic levels, while still allowing access to properties and dwellings on Priory Lane.

If this isn’t workable, for whatever reason, then the only remaining option, as previously described, is to lower motor traffic levels on Priory Lane to around 2-3000 PCU/day. This would have to be achieved with point closures at intervals or with opposing one-way sections that still allowed two-way cycling. Access for residents would be retained, and through motor traffic would have to use slightly longer parallel routes. It could even become a genuine cycle street, still open to motor traffic for access, but with very low motor traffic levels, such that cycle traffic dominates. 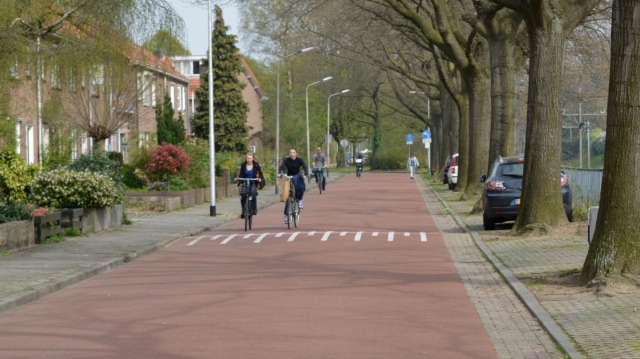 More generally this might be tied to the issue of Richmond Park itself being used as a through-route for motor traffic – Priory Lane is an extension of that through-route, and perhaps the two issues could be considered together, with motor traffic diverted onto the A3 and the A306 (and other main roads skirting the park).

These options will require planning and investment, but will have many benefits. They would reduce conflict between motor traffic and cycle traffic – not just the extreme example that has made the headlines – but the more numerous and mundane day-to-day kinds of conflict that makes cycling unattractive, like being followed by motor traffic (even driven well) for several hundred metres. Reducing motor traffic on Priory Lane (and indeed through Richmond Park) would have added multiple benefits for residents, particularly in the form of a calmer, safer, quieter and less-polluted road on their doorstep.

Just as with the recent example of conflict involving a young child and someone cycling on the pavement, this is the kind of discussion the media should now move on to. A reasoned, sensible analysis of how to reduce conflict between cycling and other modes, while making our streets safer and more attractive in the process (we can but hope).

Alternatively our media can just keep sensationalising these incidents every time they occur, as they inevitably will given the built-in conflict engendered by our road and street system. Their choice, I guess.

18 Responses to The solution is design