I can’t really believe I am having to write a piece saying this, but good road design is not conditional on the good behaviour of users.

Why am I having to say this?

Almost as soon as the discussion turned to delivery on the Mayor’s Cycle Vision, Johnson himself got straight on to one of his personal ‘concerns’. (You can listen for yourself from around the 1:27:00 mark).

Johnson The one thing I am worried about is, on the new Cycle Superhighways, which are really fantastic (although they’re not quite open), the thing I am worried about now is there are people actually going too fast. I think there are some very very aggressive male cyclists out there who are just bombing along when really you should have a climate of tolerance and gentleness on those. And you’ve spent an absolute fortune on these things. They’re wonderful. And people do not need to tear along in such a way as to scare other users.

Daniels And Angela [Knight, TfL board member] referred to things in the Standard recently with Bradley Wiggins and Chris Boardman in which it was indicated, clearly, that as part of being granted segregated road space, and more facilities for safer and higher volume cycling, that cyclists really must comply with those rules that do exist, including red lights, including speed, as part of having these wonderful new facilities.

Johnson I mean cyclists do not make great friends for themselves, sometimes, by the way they conduct themselves on the road. The aggression with which people try and break the land speed record on what should be a, you know… We’ve opened this up to make it safer for everybody, and they should be respecting people who want to get along.

Daniels And there are of course websites where people can post their times between two points.

Johnson Well I think we need to look at all this. I really do.

People are going ‘too fast’ on this new cycling infrastructure, apparently.

The first reasonable question here is – are they? Is there any evidence? None has been produced. If this actually was a genuine problem you would think some monitoring would have taken place.

Then we get to the next question. How fast is ‘too fast’? Bear in mind that these ‘Superhighways’ have all been built alongside roads that continue to have 30mph speed limits for motor traffic. Is it really the case that there are swathes of people cycling around in excess of 30mph, a speed that only fit and powerful athletes can sustain on the flat?

Even if we grant the extremely unlikely possibility that a large number of people are cycling along Superhighways at or close to 30mph, why should this be highlighted as a particular problem, given that it appears to be perfectly fine for the large volumes of motor traffic right next them to be travelling at this speed?

We might even say that cycling between 20 and 30mph is ‘too fast’, but then we would be opening ourselves up to ridicule, given that the speed limit for motor traffic across London remains 30mph on most of the capital’s roads, even on residential streets. Could we really argue, with a straight face, that cycling at these speeds is a problem while we continue to allow 30 tonne HGVs to thunder past houses, shops, businesses, at 30mph?

But this ‘speeding’ silliness isn’t even the worst thing here. It is Leon Daniels’ bizarre suggestion that the building of cycling infrastructure in London is (or was) somehow conditional on good behaviour. That the ‘granting’ of road space (a telling expression) was some kind of pact; we’ll give you what you ask for, as long as you behave. Compliance is a ‘part of having these wonderful new facilities’.

It is actually laughable to imagine any other mode of transport being framed in this way.

It was indicated clearly that, as part of being granted new roads, and better surfaces for driving, and new traffic lights like SCOOT to smooth traffic flow, that drivers really must comply with those rules that do exist, including red lights, including speed, as part of having these wonderful new facilities.

It was indicated clearly that as part of being granted new buses, and better bus routes, and a more comprehensive service, that bus users really must comply with those rules that do exist, including not swearing, or being aggressive, or listening to loud music, as part of having these wonderful new services.

Why? Should good roads, good public transport, good walking and cycling infrastructure really be dependent on everyone behaving themselves? Does anything ever get improved in London with these strange – and indeed rather patronising – covenants in place? ‘We’ll grant you this new tube line, but let it be clearly indicated that, if we do, we really don’t expect any more antisocial behaviour from tubists’?

Of course not – it’s the worst kind of outgroup thinking, along with Boris Johnson’s reference to ‘cyclists not making friends for themselves’, as if people who happen to ride bikes are some neat little collective, rather than a random selection of people making about 600,000 trips every day in London. It’s fantastical to imagine such an enormous amount of humanity trying to police themselves in order to present a better image, without any of them being aware that’s what they’re supposed to be doing. What’s really happening here is the invocation of the ‘bad name’, this persistent canard that the reputation of anyone who rides a bike should be harmed by the behaviour of complete strangers. 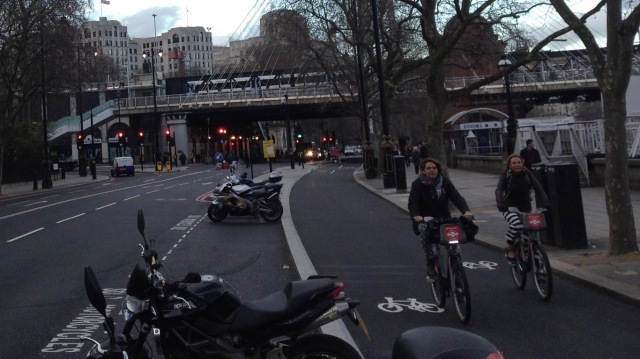 Enough. I think the new Superhighways are great; I enjoy riding on them. Please don’t pretend that their existence – and indeed future improvements for walking and cycling in the capital – should in any way be conditional on behaviour, or even related to it. Do your job, and design streets and roads that work well for all users, even if – as surely as night follows day – many of those users will be antisocial or lawbreakers.