Posted on October 12, 2016 by aseasyasriding

Queuing might be a word with a French origin, but the British have a reputation for it, particularly for doing it in an orderly fashion. But our passion for queuing is, perhaps surprisingly, a relatively recent development, arising out of industrialisation and poverty in the 19th century, and especially, rationing during World War II.

I have noticed that this ‘British’ approach to queuing is, sometimes, affecting behaviour on the new cycling infrastructure in London.

The most efficient behaviour while waiting at lights is, actually, to double up, even if this appears to involve ‘queue jumping’. It’s standard practice that you will see at any Dutch junction with separate cycling infrastructure. 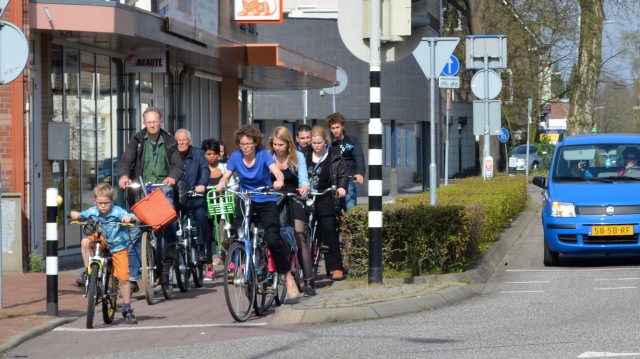 Two neat rows of people, making the most efficient use of the space, and ensuring the maximum number of people get through the lights on green.

Generally, I do find exactly the same kind of behaviour at the lights on similar infrastructure in London – although maybe not quite as compact. 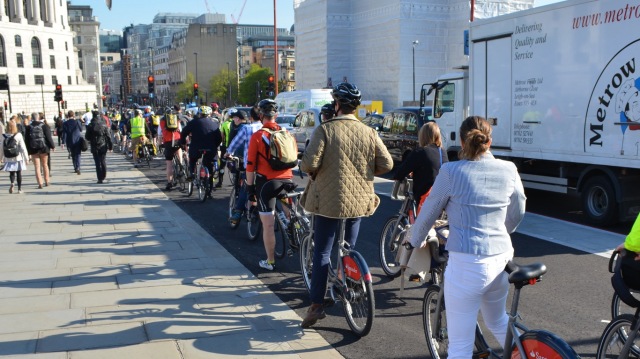 But there are exceptions. Very occasionally I will find a queue that isn’t ‘doubled’. 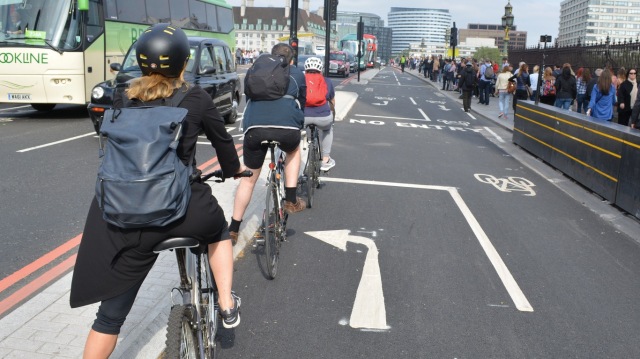 There’s a particularly good example in the @sw19cam video below, at the 5:05 mark, as he emerges out the other side from Blackfriars underpass, waiting at the lights to cross onto the Embankment.

Sensibly, he decides to go right to the front, in what might be seen by some as ‘skipping the queue’. I don’t think he is, at least not in this context. Everyone should be doing this,  especially at this particular location, where there is a notably short green phase.

The question, then, is why do people queue in single file, when it hampers your (and others’) ability to get through a junction? My guess is it might be partly out of politeness; partly out of a belief that, by moving over the right, you might be making a bold statement that you are ‘faster’ than riders on your left; or even that you are ‘queue jumping’.

So don’t be afraid to double up! You’re not being rude, you’re not pretending you’re faster, and you’re not queue jumping. You’re just helping everyone. If you don’t feel you are fast enough, you can just merge back to the left, and let everyone past as the queue disperses through the junction.

This entry was posted in Infrastructure, London, Uncategorized. Bookmark the permalink.

37 Responses to Doubling up