On-street parking and cycle tracks are not incompatible; in fact, quite the opposite. Parked cars – where on-street parking is necessary, and/or allowed – actually provide a useful barrier between the cycle track and moving traffic.

Take this example from Utrecht.

The wide cycle tracks run outside of the parked vehicles. This is subjectively safer (it feels much calmer cycling along with what amounts to a barrier between you and passing vehicles) but also objectively safer – the risk of ‘dooring’, when drivers open their car doors without looking, is decreased, for a number of reasons.

Could this arrangement be used in the UK? Of course. Biltstraat is no wider than a typical UK street. The space for the cycle tracks has come at the expense of needlessly wide vehicle lanes. On Biltstraat, the lanes are still wide enough to accommodate two buses or HGVs passing each other. 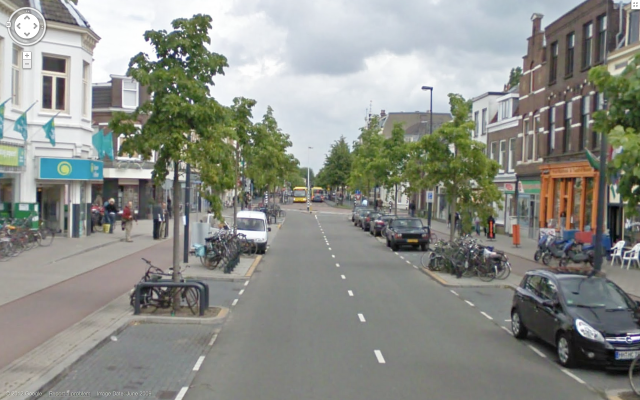 In the distance, two buses passing each other. Courtesy of Google Streetview. 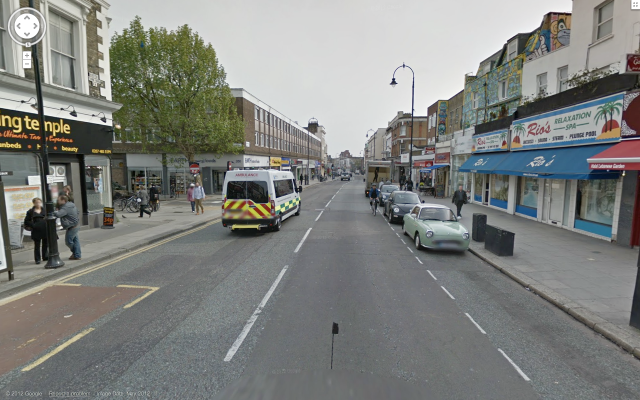 The essential difference is the width of the carriageway in Kentish Town, vastly wider than on Biltstraat. Move the parked cars seen on the right of the picture out, narrow the carriageway, and you have space for wide cycle tracks on both sides of the street, with the added bonus of the calming effect on traffic speeds from slender vehicle lanes (Biltstraat has a 30 km/h (18 mph) limit, but this is, to an extent, self-reinforcing due to the narrowness of the carriageway). The cyclist seen in the picture above would no longer be trundling along between parked cars and overtaking vehicles.

Peaceful and calm, and isolated from the large vehicles passing on the street itself.

There are plenty of other streets in North London which could have the same treatment. To pick a few –

Essex Road, N1. There is a wide bus lane here, which can obviously be kept, but narrowed, along with the other carriageways. A cycle track on the right would pass behind the parked cars. Courtesy of Google Streetview.

York Way, N7. A wide (one-way!) street, again with parking bays. Not difficult to see where the cycle tracks can, and should, go. Courtesy of Google Streetview

And outside of London, a couple of examples from Horsham.

Queen Street, Horsham. The parking bays on the right could be kept, but moved out into a narrowed carriageway.                    Courtesy of Google Streetview

The Bishopric, Horsham. Parking on both sides, but a needlessly wide carriageway. Courtesy of Google Streetview.

Converting these streets in this fashion would obviously be a major operation, and would cost money. What is essential, therefore, is that when streets are redesigned and ‘improved’, the design is right. If cycle tracks and associated cycling infrastructure is put in as part of those redesigns, there is zero extra effective cost. We need to get things right on Leith Walk in Edinburgh, where £5.5 million is being spent redesigning the street (a very wide street), but, at the moment, without any apparent concession for cycling.

Interestingly enough, there are proposals for a redesign of several areas of Horsham, one of those areas being  Albion Way – a major dual carriageway carrying traffic through the centre of town.

The consultation document [9mb pdf] suggests converting this thoroughfare into a single carriageway road, with cycle tracks protected by parking, on the continental model.

Proposals for the alteration of Albion Way in Horsham

This is very promising, and I hope that any redevelopment in the future doesn’t ignore these recommendations.

Obviously there is an enormous amount of width to play with on this particular road in Horsham, but the principle of using on-street parking, as and where it exists, to keep cycle tracks separated from passing traffic is a sound one. On-street parking is obviously not necessary for safely designed cycle tracks; you can separate in other ways. But there is no inevitable conflict between on-street parking and cycle tracks, provided they are arranged correctly, and the street width is allocated properly.